Its founder, Miguel Navarro, has been dedicated and trained in terms of productivity for years, helping hundreds of people along the way.

Today they have everything from simple courses, to complete support programs to double the performance of their clients and transform their lifestyles.

Most successful businesses have something in common:

The problem experienced by their founder. In this case, Miguel Navarro is no exception.

Obsessed with the capacity for unlimited improvement, and in love with people’s ability to overcome themselves, he has always taken care of his habits to unusual levels.

With a couple of ventures behind him and a lot of experience in the engineering sector (to the point of obtaining a Ph.D.), Miguel decided to take his training a step further, and that's when he started his path at Level Up, one of the most recognized schools in terms of entrepreneurship.

Noticing that his obsession with habits had transformed his life, and after having trained with the best speakers in the country, he decided it was time to share what he had learned.

Maybe someone could benefit from his knowledge (those were the first hypotheses before creating Productividad Feroz).

Two years after its creation, Productividad Feroz has helped thousands of people to make the most out of the time they use, and above all, to exploit their human potential with better habits.

All beginnings are complicated. Even more so when it comes to business.

In this case, Miguel Navarro decided to venture into this adventure with a partner to have someone with whom he could share some tasks and move forward together.

However, after a short time, he was forced to face all the challenges alone. That's when he became the popular Multi-tasking Man.

“He founded the company, managed it, collected the money, did marketing, sales... He ended up doing it all by himself.”

The turning point came soon after and with it an obvious conclusion: If Miguel did not delegate, the company would eventually die.

The trademark of his programs was undoubtedly the support he could provide. Miguel's experience and knowledge ended up being a major factor in attracting, converting, and retaining new users.

Delegating was a must.

To this end, he began to study the possibility of hiring tools that could facilitate the management of certain tasks (marketing, sales, invoicing). Then, people would have to be recruited to manage the tools. That way, he could make sure that everything was in order and working.

The two priority functions at that time were:

Among all the possible tools, ActiveCampaign fulfilled both of them perfectly.

Taking advice from a few agencies, Productividad Feroz started implementing automations in ActiveCampaign to save time and maximize their results.

Having gone through a period of "manual execution", being able to automate processes became more important than ever. In addition, choosing a tool that would support the company's growth was critical.

"If you take different tools, all together, they do their job. But once the company grows, and if you have ambitious goals, you need a tool that brings it all together and allows you to grow. That's why we decided to start working with ActiveCampaign".

The first thing on the list was email marketing.

Productividad Feroz has always been known for doing very good marketing, and above all, for experimenting a lot. Automating the emails to be sent was one of the fundamental tasks.

In their case, it was not a complicated task. Working with different agencies they were able to leverage ActiveCampaign to reach an interesting point ..

Each time a user left their data, they would receive some sequence that would allow them to learn more about the company and the services it would offer. Each sequence brought the user closer to purchasing.

And although at the beginning they were not perfect, the automations started to give results .. 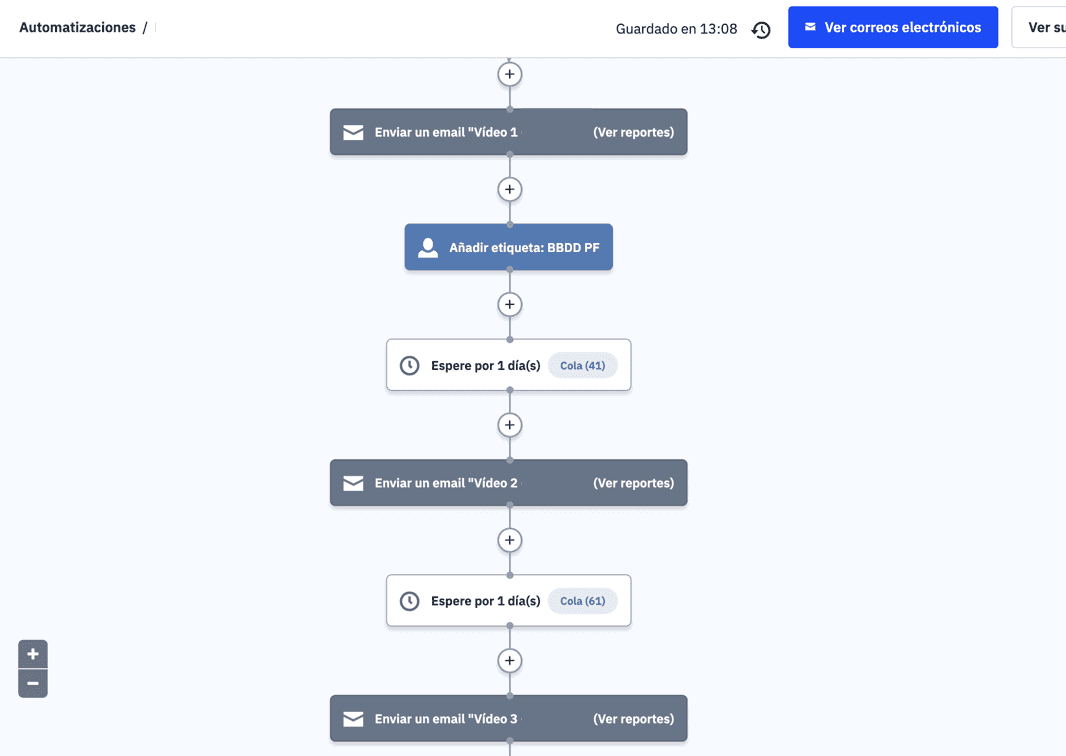 The next task was one of the most complex. Thousands of companies face it every day…

How can a company get sales and marketing aligned and work on the same information?

Although complicated, today there are many tools that make it possible. ActiveCampaign is one of them.

With the Deals feature, Natalia was able to map the entire company’s business cycle, that is, to define each of the stages before a user ends up buying.

Before buying a product, we all go through different stages before we end up spending money. Each of these stages depends on the business model.

Perhaps before buying a pair of shoes, a user first looks for some examples online. That is the research phase.

Then, he tries to compare them with competing ones. That is the comparison phase.

All products and services have it, and in the case of Earn 4 Hours and Superior Brain (the main programs of Productividad Feroz), they are no exception. 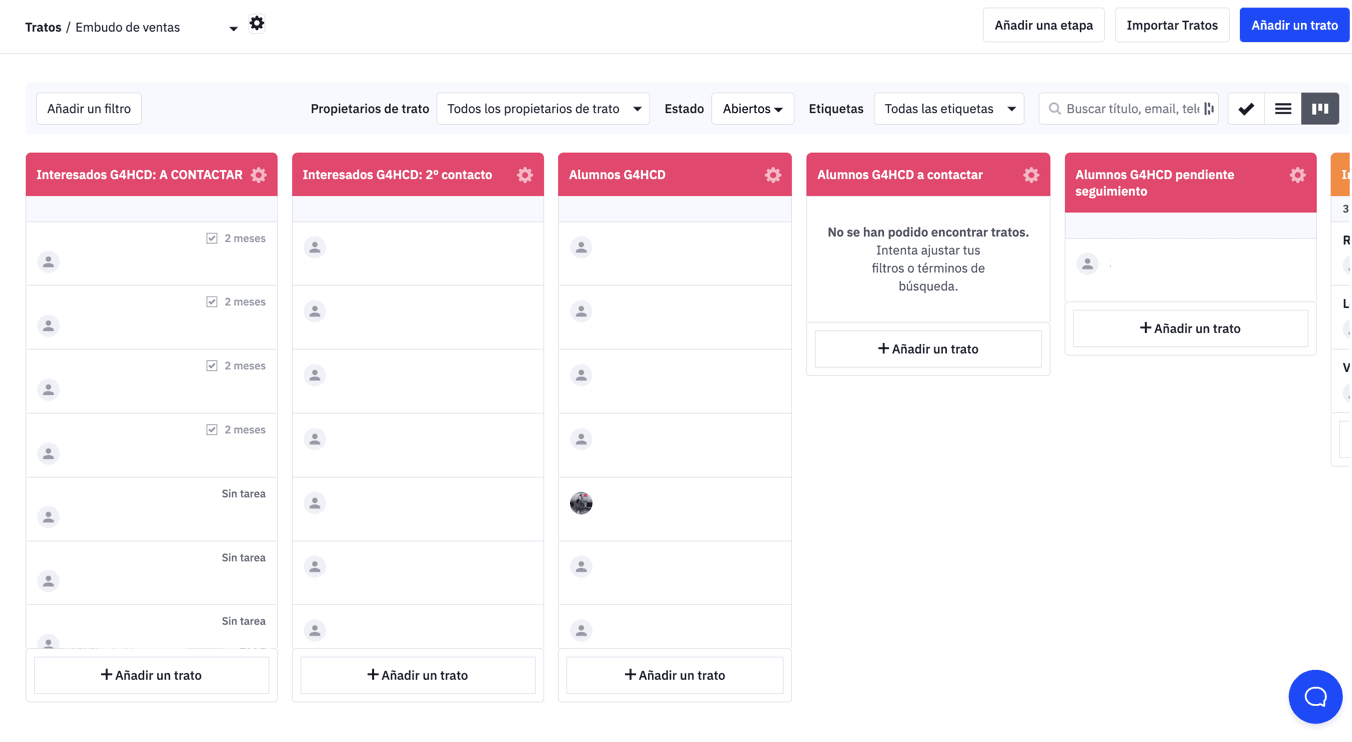 Deals feature and its stages

Natalia focused as much as possible on identifying these stages to be able to monitor users at each one of them.

To keep the sales and marketing department on top of each user's business situation.

The marketing team focuses on getting users to the initial stages (discovery, consideration) and the sales team focuses on capitalizing those users into sales (closing the right program purchase).

Because the information is at the fingertips of any team member, both departments can benefit from the contact's information and history to do a better job.

“Thanks to that, the edition we have right now, with more than 600 students, is working great. The whole team is super well-communicated, everyone knows the people and clients we're targeting. It gives us tremendous information about what's going on.”

Automating the CRM with the help of Wild Mail

Having a map of the steps a user takes before buying, marks a before and after in the way of selling and following up; but that is only the first step.

Having the structure to introduce the data is fine, but if those structures are not fed with the right information, you have a map without information.

In this case, CRM and Deals automations allow you to fill in user information automatically, and more importantly, you can trigger subsequent actions (so you don't have to do it manually).

Natalia knew that the CRM had to be automated, as Miguel had had problems in the past with manual tasks. The challenge was how to make it happen.

In this case, Wild Mail's Success program came in handy to solve the problem.

“We were using ActiveCampaign at first, but then we met Benji and Wild Mail, and we valued making the migration. The ability to have better support, someone who would speak Spanish and help us with these challenges, was appealing.”

“Having everything so mapped and automated is partly due to all the explanations you have been giving us, those pieces of training with all the patience in the world... You have made it much easier to learn the tool to automate.”

On different occasions, we sat down with Natalia and the Productividad Feroz team to explain how this can be made possible. On those calls, we explained how CRM can be automated thanks to the information or behavior of the users.

To do this, only two things had to be taken into account:

That was enough to create automations of all kinds and shape the CRM in any way the company wanted.

In this case, as in many others, we did not execute a single action. We were simply showing how to use this type of feature in ActiveCampaign and giving the best recommendations to do so. 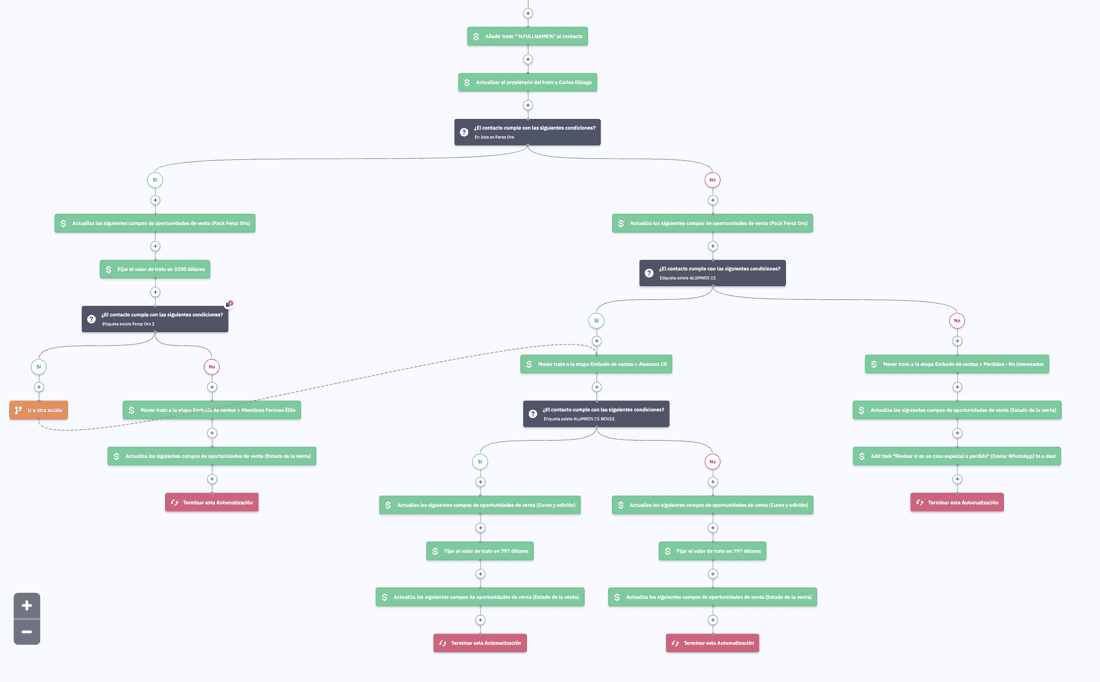 Natalia learned how to create powerful automations to get even more out of ActiveCampaign’s CRM.

The CRM was now more up-to-date than ever.

Total alignment between the marketing and sales departments.

Productividad Feroz is clear about the stages a person goes through before making a purchase. And most importantly, it has automations that allow them to trigger emails and reminders, organize their CRM, and any other actions they need to take.

Natalia has been able to take advantage of ActiveCampaign to forget about manual tasks and organize the sales cycle.

We at Wild Mail have done our best to help Miguel Navarro and his team as much as possible. We will be happy to continue to do so in the future.

After all the hours invested in automating the business cycle correctly, Natalia has mastered almost all the features of ActiveCampaign.

We took advantage at the end of the interview to ask her for some recommendations and suggestions for other users:

And her answer was:

Although the challenge may seem complicated, Productividad Feroz has shown that sales and marketing teams can work side by side for the same result.

What is Wild Mail?

Wild Mail is ActiveCampaign for European companies with extra benefits:

What is Wild Mail?

Wild Mail is ActiveCampaign for European companies with extra benefits: